Newsnow Desk: Fair Group has stood beside the youth of Bhutan for developing the technical skills.

In response to a request from the Bhutan Embassy in Dhaka on behalf of the Bhutan government, Fair Group organised a monthlong special internship program for them in smartphone, consumer electronics products and automobile maintenance and servicing.

Bhutan was the first country to recognise Bangladesh as an independent country. During the war of liberation, on 6 December 1971, Bhutan officially recognised Bangladesh.

Referring to the deep ties between the two countries, Ambassador of Bhutan Rinchen Kuentsyl said that Bangladesh’s role in the socio-economic development of Bhutan is immense. 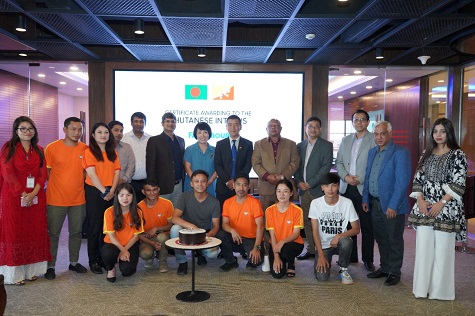 Expressing deep gratitude to the Fair Group on behalf of the Government and people of Bhutan, he said that Fair Group has provided hands-on education to the youth of Bhutan through internship programs.

He expressed confidence that they would return to Bhutan to be partners in socio-economic development.

Ruhul Alam Al Mahbub, Chairman, Fair Group, assured to continue the cooperation in the development of human resources in Bhutan.

He said Bangladesh-Bhutan friendship is eternal. He also said that skilled trainers will be sent from Fair Group if necessary to enhance the skills of the trainers in Bhutan. Fair Group’s partner Fair Solutions, Mirpur Samsung Center, trained six young people of Bhutan on smartphones and consumer electronics products, and at Fair Technology Hyundai 3S Center in Tejgaon, two young people in Bhutan were trained in automobiles.

Prime Minister Sheikh Hasina’s pledge – ‘Made in Bangladesh’ Fair Group is continuously working to implement. They are producing South Korean famous Samsung smartphones and consumer electronics products at the Fair Electronics Factory in Shibpur, Narsingdi and marketing them all over Bangladesh.

The work of setting up a fair technology factory at Bangabandhu Hi-Tech Park in Kaliakair, Gazipur is now nearing completion, where they will soon be assembling South Korea’s famous Hyundai SUVs and sedans.